Once upon a time I bought a rocking stool at a jumble sale.

That was 2 moves ago and it’s still doing well. I love it. I love the thick padding and I love that it rocks. I love that it’s the right height for me to work at and I love that I’m short enough to have the choice of putting my knees or my feet on the knee pads. My brother ends up with his knees in his ears if he tries. I apparently have a problem with sitting in the same position for more than a few minutes so all the variations are very welcome.

I don’t so much love that sitting on it for long stretches of time hurts my back and occasionally my knees. Actually. I think it probably doesn’t hurt it in terms of ’cause it to hurt’. It probably just makes me notice where it already hurts. I should probably work on making it stop hurting rather than blaming the stool, but whatever.*

When I saw an adjustable rocking computer chair being given away for free on the local ads website I immediately wrote to ask if I could have it (and then went swimming for the first time in over a year).

Their original suggestion, a few hours later, to go and pick it up straight away, was thwarted by the time of evening and my lack of car and energy. An almost 3 hour round trip involving multiple buses and train seemed a bit over the top for a 7km journey (more than 3 sides of a square due to the way the train lines are set up) at 7pm on a work night. I suggested that the next day would be better and they agreed to look after it a little bit longer.

When I first said I wanted it, I’d been planning on asking H to pick it up in his car for me. He wasn’t there to ask, even after I got back from swimming, but it seemed like a thing he’d be willing to do. It’s not all that far away and he picked up a desk and skis for me before. However. I hadn’t planned on his friends having a wardrobe emergency resulting in needing his help well into the night, for several evenings**. When he got back from the first episode and told me about his plans to continue with it over the next few days, it was obvious that his free time to pick up chairs was so limited as to be non-existent. I didn’t ask or even tell him about the chair.

I cycled to work as usual in the morning, still wondering how best to bring it home. I was pretty sure that if I asked them to reschedule again it would be gone before I could get there.

I was still unsure when I left work. I almost left my bike there and got a bus to the chair family’s house but I remembered just in time that I can push my bike better than I can carry unwieldy furniture. I decided to use my bike like a trolley. The plan I made up in my head on the way to the chair family’s house was to push the bike-plus-chair combi to the station, take a handful of trains around an unnecessarily large part of Berlin and push it home from the station.

In the end (remember my track record of following through with any kind of plan?) I didn’t do that.

Instead, I pushed my bike all the way home. 🙂

It made the most sense of all my available options. After balancing the chair on the saddle and looking at train connections and remembering how much fun I’d had with the skis and the stereo on the train, I figured it was going to be easier to just walk than to fight the stations and lifts and train doors. It was also not going to take me any longer to do.

Luckily it was a fantastic day with no sign of rain or wind (or snow, although that would have been surprising in July) and a friend had some time free to spend on the phone, catching up and filling me in on her new job. I enjoyed the impromptu walk and phone call immensely.

There was a very helpful saddle shaped hole in the base of the chair. 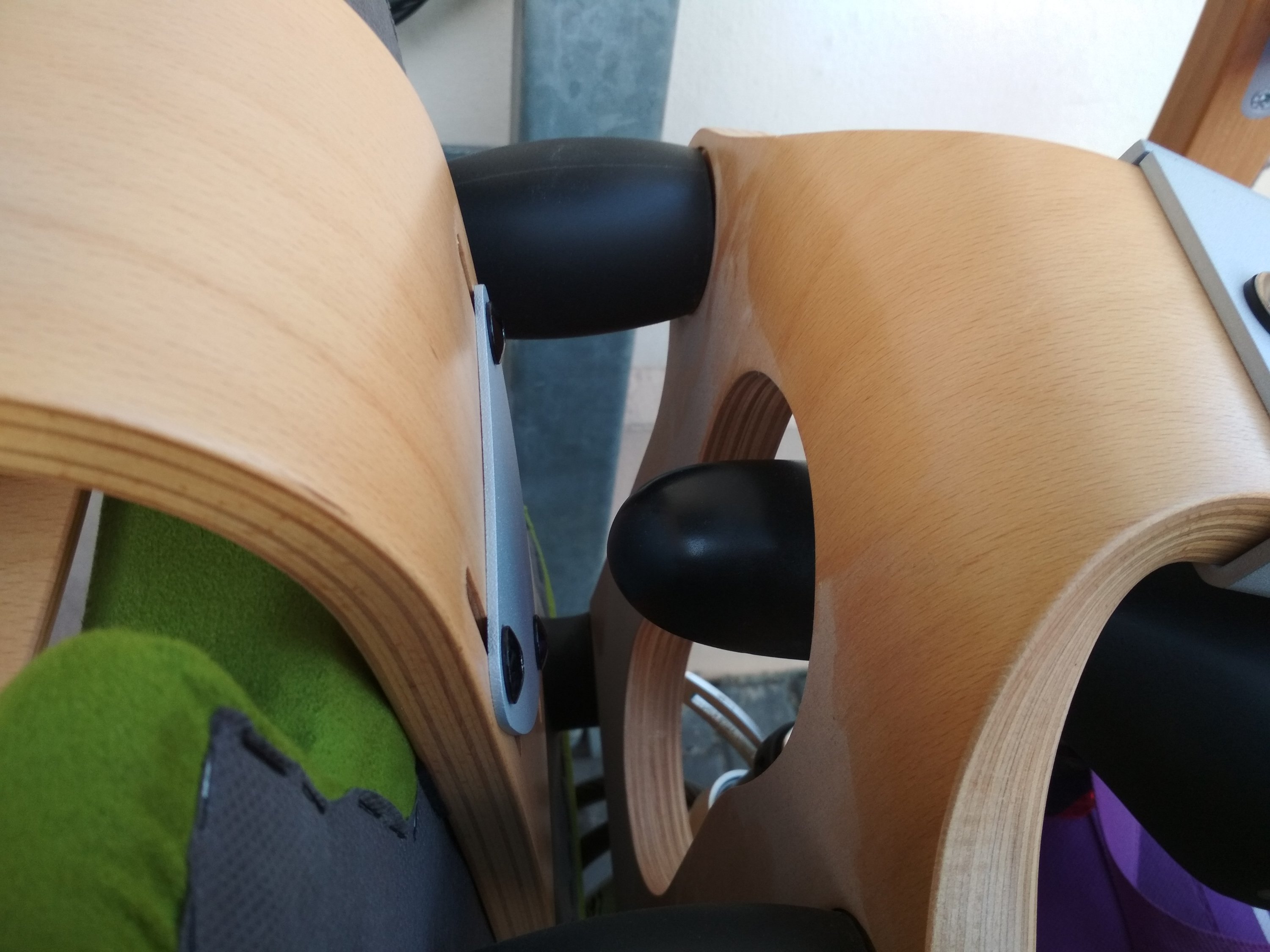 And that was the end of another successful trip.

* I expect it’s probably age-related because I don’t remember it being a problem before.. It’s also likely related to my sword-like bad posture, which is supposedly something the knee-stools are good at combating… Ho-hum.

** Germans have huge wardrobes. Like really huge wardrobes. Wall-to-wall wardrobes in houses many times bigger than the average Brit’s. I was in a posh furniture shop yesterday and the wardrobe section was very very scary. I think H said this one was nearly 4m long and 2½m tall. I have no idea what to fill almost 6m³ of wardrobe with, but it’s not my wardrobe and therefore not my problem.

2 Replies to “On furnishing adventures – the rocking computer chair”