It seems that it’s impossible to add purely Good Things to a life.

Have lots to do inside at the weekend? Bam! Have a couple of fabulously warm sunny days so you either feel guilty about missing them by being inside or about not doing the things you’d planned.

Finally get motivated enough to practise running? Bam! Do something to your ankle and need to take it steady for a while.

Finish a project at work? Bam! Get a crazy migraine headache and have to be rescued because there’s no way you’re going to cycle home.

Find a friend you haven’t seen for years? Bam! Someone you love is taken to hospital….

Banal or super-important, nothing is safe and even if nothing is actually related, sometimes it seems to be.

I’m armed with a plan and 4 bottles of eye drops.

I have an appointment with a doctor on holiday, and I don’t have to come in again tomorrow – WHOO!! 🙂

That’s all good news :). The not quite as good news is that I can’t get any glasses made until I’ve ‘finished healing’, so at least not for the next week, probably two. Got to love [semi] blind holidays 🙂

And I have to avoid too much sunshine………

But hey. Whatever. At least I can keep my eyes 🙂

Here are the most important updates:

– I am going to be released in the morning, assuming the head doctor says things are ok.

– I have to promise to come back for a check-up on Friday, and can go on holiday as long as I go to see an eye-doctor while I’m there. (:))

– I am allowed to sleep through the night (WHOO!!!)

Monday.
The first day of the busy week. DB and I slept in until half past 10 in the morning, which is a little bit later than I’d planned, but next to unheard of for him… I lazed about on the sofa until I finished my jigsaw and only half-heartedly started sorting out the first couple of boxes in my corner before a friend of DB’s came over. We all chatted for an hour or two and before I knew it, it was dinner-time, followed by walk-round-the-housing-estate-time, followed by crash-out-on-the-sofa-time.

My eye itched for most of the day, and I mostly ignored it. It was a bit dry and a bit red, so I dropped eye drops in every so often, but I get itchy, dry eyes fairly regularly anyway, so I didn’t really think too much about it until we were out walking and the street lights made my eyes hurt. I thought I must have got dust in them while cleaning.

When I peeled myself off the sofa, I took my contact lenses out, washed them carefully and went to bed reasonably early.

Monday night.
On an average night, I wake up at least once to go for a pee. On Monday, I was up several times, to put more eye drops in. My eyes (especially the right one) felt gritty. They wavered between feeling too dry, and feeling like I was crying.

Between loo-trips and eye-drop-trips and tossing-and-turning and fighting with the duvet, I didn’t get a lot of sleep.

Tuesday.
In the early hours of Tuesday morning, I discovered that I couldn’t open my eyes. Or rather, I could, but it hurt. A lot. A very lot as we used to say in my family :).

We live on a road with streetlights, so even when the curtains are closed, a little bit of light comes in. That was enough to make me hide back under the duvet and scrunch my eyes closed.

At some point DB’s dad phoned and DB got up to help him. I stayed in bed. There was no way I could go anywhere or do anything useful. Looking at things is pretty impossible through closed eyes.

I slept for a while instead.

When I woke up, opening my right eye was still excruciating. Opening my left eye was ok, as long as I didn’t move it or look at anything remotely light. (Not because my left eye hurt, but because they’re synchronised and when left moves, right moves too. When left pupil dilates or closes, right does too). Even with my eyes shut I wasn’t totally pain-free. Just moving my eyes was like prodding a bruise or putting pressure on a sprained ankle.

I went back to sleep. Or at least tried to.

In the time it took DB and his dad to remove and replace the exhaust pipe on the van, I managed to sleep a bit more. I also managed to fumble my way to the cake tin in the kitchen. 😉 Opening my eyes without wincing (too much), came later. Something like 20 mostly-blind eye-drop trips later.

I was able to fully open the curtains at about half past 3, as the sun was starting to go down and I’d had a bath in the near-dark.

I’d originally asked DB to take me to see an eye-doctor when he got back.

When he got home, my eye was still bloodshot, but it didn’t hurt neatly as much and I was able to read (and write) one-eyed (hence the quote posts), and felt things were much improved. I wavered against going anywhere. We settled for going to a chemists and asking for more eye drops and a second opinion.

The chemist-lady said she had eye drops, but the good ones were all prescription-only. She said it looked pretty bad (totally bloodshot and a little bit puffy), and recommended going to the specialist eye-clinic.

4 and a half hours and a lot of bright lights later, we left the clinic and drove home with enough time to eat quickly, and to pack an overnight bag for an indefinite hospital stay.

It’s amazing how rationally I think when I should be panicking, and how much I panic when there’s no reason for it.

This was rational packing. My bag was packed with far less hassle than when I go on holiday. I thought about my wash kit, dug out a string of fairy lights from a box in the furthest corner of the bedroom (if I’m going to be stuck in hospital, then I want it to be pretty), counted socks and underwear and chose a variety of different books to read. I packed a phone charger, and earphones, and an MP3 player. DB cooked, then packed the tablet and some chocolate for me :).

Just over an hour later, at exactly 10pm, we were met by the porter (/whatever the men who escort you to the right ward are called).

The night nurse was amazing, the morning nurse not so much.

Considering they were both responsible for squirting drops in my eyes every hour or so through the night, they couldn’t have done it more differently. It seems some people are more suited to the job than others. In the middle of the night I want to sleep. I don’t want to be woken up more than necessary. Given the choice, I will always favour someone who appears by the bed silently, gently lays a hand on my shoulder until I roll over and open my eye and gets the drops in and mopped up and is out of the room before I have time to become properly conscious, over someone who feels the need to open the door loudly, trample across the room and boom in a ultra-chirpy manner that it’s ‘time for more eye drops!’. Also, if the fairy lights I’m sleeping under provide enough light to see by, why turn all the ward lights on?!

Without lenses I turn into a mole. I can see things but they don’t have defined edges. The world looks more like a Monet painting than a Litchenstein cartoon. I can read ok, but I can’t see your features if you stand across the room from me.

I haven’t worn glasses in years. I don’t even own a current pair of glasses – contact lenses are so much more practical, and since my eyes kept changing strength (or weakness in my case), I decided to wait until they’d settled down before ordering glasses.
They’ve been stable for a year now, so buying a pair of glasses was on the list of Things-to-do-in-2016.

I’m not allowed to wear contact lenses for the best part of a month. That’s a lot of time to be blind.

It’s New Year’s Eve tomorrow. Everything shuts at midday. Nothing opens at all on New Years Day, and we fly to Lanzarote early on the 2nd (Saturday). Then it’s Sunday and nothing will be open there either. There’s a slight chance something might open on the Monday, but there’s a lot of chance it won’t, because the Spanish celebrate Christmas up to the 6th of January. I hope I can get someone to make me a pair of glasses after that at the very latest. That’s more than a week of mole-dom. 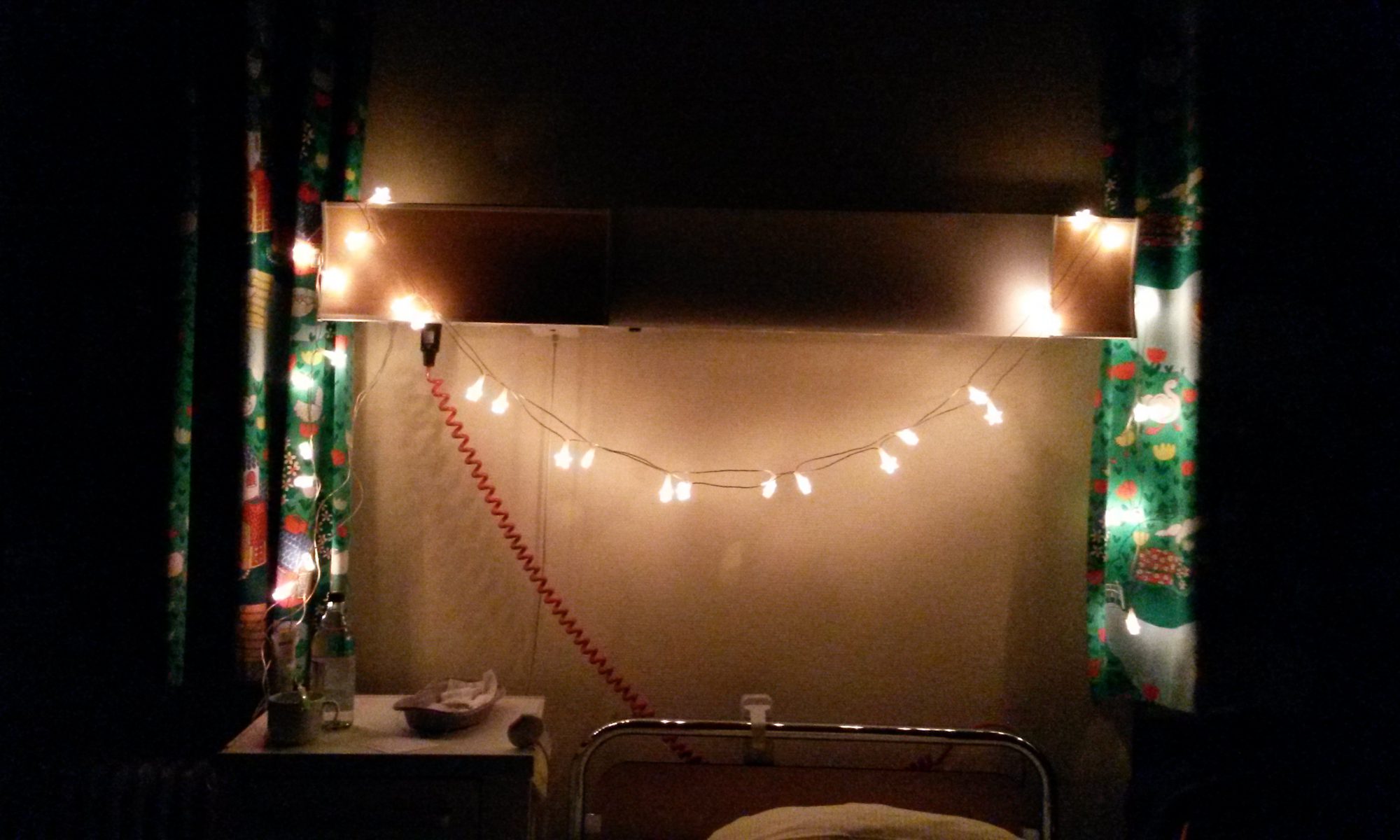 Sometimes, I think I should just stop making plans.

I mean, I know they never work out the way I intended them to, so I could save myself the bother of making them in the first place.

This year, the company I work for closes between Christmas and New Year. This means I have ‘ZwangsUrlaub’ or compulsory holiday.

I was planning to relax until Sunday, doing jigsaws and folding stars and making Gingerbread houses (which I still have to post, sorry) and other Christmas Things, and then spend the compulsory week off work (Mo-Fr) tidying up my corner, finding the bottom of the washing box, hopefully finally getting some paintings finished, maybe even getting some pictures on the wall, before flying away with DB on Saturday for 2 weeks of sunshine and more relaxing (dear theoretical burglars, please note – we have housesitters with a dog).

We were also going to visit a couple of DB’s friends and celebrate the new year with fireworks and copious amounts of food (me) and alcohol (DB).

What I wasn’t planning on doing, was spending time in hospital. Not as a visitor, not as an outpatient and most certainly not as an inpatient.

Turns out I have Keratitis and have the dubious privilege of at least one, probably two, possibly more, overnight stay(s) in hospital where the night-nurse has the dubious pleasure of waking me up every couple of hours to drop eye-drops into my sleep-deprived eyes.

This is my bed:

Apparently I’m the first patient to bring fairy lights with them.

However, it appears to be a Good Thing because it means I can leave them on and the nurse doesn’t have to turn the main lights on and wake everyone up.

According to the doctor I saw after 4 and a half hours in the waiting room, and who shined multiple very shiny lights in my eyes, it (Keratitis) can be a dangerous thing to have.

Mine doesn’t seem too bad, but I could use any spare prayers you have…

(Eyesight is crazily important, and I’m going to do all they say I need to do to get better, but they’re contemplating cancelling my holiday – to ensure that I can be monitored – and that would suck big time. DB needs a break, and we chose not to book cancellation-insurance, so the money would be gone too…)

P.S. I’ll write some of the background story tomorrow..