It’s a long one, folks – I hope you have good biscuits..

I have no idea whether the receptionist phoned ahead or whether it was pure good timing that there wasn’t a queue and that the carer who met me at the gate knew who I was and why I was there, but it’s quite a walk from the reception to the RehaCentre and it was still cold (duh!) so I was happy. She ushered me into the surgery/meeting-room and joined me as soon as she’d fetched the paperwork.

Just as we’d both sat down and started unpeeling layers and spreading out papers, another carer rushed in and told us we had to leave because ‘those people’ were back, ‘the ones that complained last time’.

We bundled the papers back together, put our coats and gloves back on and headed back outside to the only other table – outside, against a wall, overlooking the main gate. Not a bad place to sit in summer, in winter it was a little bit nippy… But hey – it wasn’t going to take long, right? All I had to do was sign some bits of paper and I could take P home. Easy. Right?

We settled down on our mismatched wooden chairs, and began again.

It was a bit too windy for spreading papers out, so ‘my’ carer started by explaining the intricacies of the adoption process. Unfortunately she was whisked away before she got very far – she was needed elsewhere.

For the next hour or so both carers were involved in a long and presumably complicated process involving three cross people who may or may not have wanted to adopt a dog, but had been ‘made to wait’ (for at least a minute and a half while we’d vacated the meeting room, and for an unknown length of time on their last visit – I’m going to guess way less than ten minutes) and had no intention of doing anything remotely helpful – like listening or thinking.

Meanwhile, I sat outside, at my mostly windsheltered table, and watched the carers to take it in turns to rush backwards and forwards between the meeting room and their other duties; bringing dogs to various visitors, answering questions, returning dogs to their respective kennels, taking loads of laundry from A to B, fetching leads and harnesses and bowls and blankets, letting me know they’d be there for me soon. Amazing. Multitasking at its best.

(The home, or at least as much of it as I’ve seen, is well run overall, but probably understaffed. Especially when some people demand more attention than they’re due.)

I don’t mind waiting. Especially if there’s a good reason for it. Even when it’s cold. I have a good coat and thick socks and my skiing gloves. I’m unlikely to actually freeze to death if I sit outside for an hour. I have a phone, I can read, write and take pictures. No problem. I probably wouldn’t be doing much else if I was on a train. I spend a lot of time on trains, waiting to get to new places, and although trains are generally warmer, the stations generally aren’t. Getting a dog is kind of like getting off a train at a new station. You got on the train with the intention of getting out at whichever station you chose, but you don’t necessarily know what you’re going to find when you get there.

I do mind other people minding waiting. Especially if there’s a good reason for them having to.

Good reasons in both cases are things like the level of dedication the staff show. Not only to the dogs themselves but also to the people who come to look at / pat / collect them. Like recognising us (and probably every other potential owner) right away from the second time we went. Like knowing who we are, which dog we want to visit, what who’d said to whom and when. Fantastic. That’s hardly a reason to complain to the management.

Adopting P was remarkably simple when it finally happened: listen to this, read that, sign here….

I was issued with a pallet of dog food, a bag of medicine and a list of instructions for both.

And a dog. Obviously. But she didn’t come with instructions.

It wouldn’t be Germany without doubled up paperwork. Once the carer and I had signed all the various papers, I had to take them back to the reception…

…where “those people” were arguing with the receptionist about the idiocy of the 5 day rule* and about having had to wait, again!, and about wanting to see the management. And not just the idiot they’d been fobbed off with last time…

Turns out, that was the top manager – so his boss didn’t exist regardless of how much they wanted to see him

HAH!! That told them.

They muttered and grumbled off to berate him again, finally freeing up the desk for me to smile, tell her what a great job they all do and hand over the forms to be copied. 🙂

P and I went for a walk before driving home. I wasn’t sure how she’d react to being in a strange vehicle, but I figured it would be better if she was tired first. Or at least not quite so bouncy – I’m pretty sure she can’t be worn out by a half an hour’s walk. If nothing else, it meant she didn’t pee in the van.

She’s too short to see out of the van’s windows, and I didn’t think to lift her onto the seat, so she spent most of the journey balancing on her back legs, with her front paws on the windowsill. I couldn’t see her in the mirror, but I heard the scratching and panting. I probably turned to make sure she was ok at every traffic light or give way sign all the way home. Braking in/on slush is ‘fun’ anyway, braking on slush when you’re trying to concentrate on not sending a brand new dog flying is a little bit daunting.

We both survived unscathed though :).

I wasn’t sure how much newness she could take in one go – people, car, house – but walking in unknown snow must be the same everywhere, so I took her for another walk in the snow when we arrived, before I even let her into the garden. 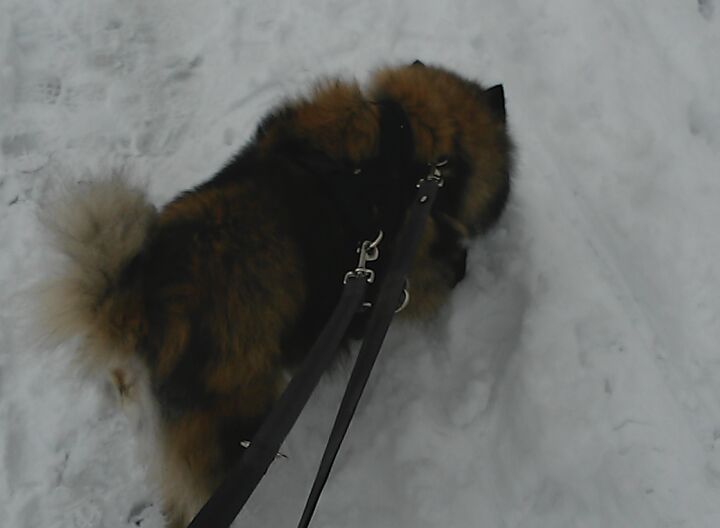 Then, we went home and lived happily ever after.

* The way the adoption works, you have a 5 day trial run.

On the fifth day, you have to take the dog back to the home for a complete check up by a vet. They make sure you haven’t been mistreating it, and, assuming you haven’t, they hand you all the paperwork (proof of ownership, immunisation info, vet reports etc).

If they declare you unfit, or anything else goes wrong (you decide you really can’t cope with a dog / your landlady complains about the barking / whatever) you can leave dog at the home and get your money refunded. You can still take them back after the 5 days, but it’s more complicated.

One Reply to “On actually, finally, really and truly getting a dog – part [K]9”