It’s the last day of my holiday and I’m on a train back home. Just one (three counting the local trains at each end) with no changes between Düsseldorf and Berlin (which is a very good thing considering how much luggage I have* and how often the lifts are broken).

Besides being tired and achy and looking forward to getting home and having a bath, I am currently incredibly smug and incredibly angry in fairly equal parts.

I booked a ticket for myself and my bike in advance. For unknown and uninteresting reasons, the train carriages are in a different order today and the space I booked doesn’t exist at all. There is still a fairly large bike compartment though, so I set up camp here in the corner. 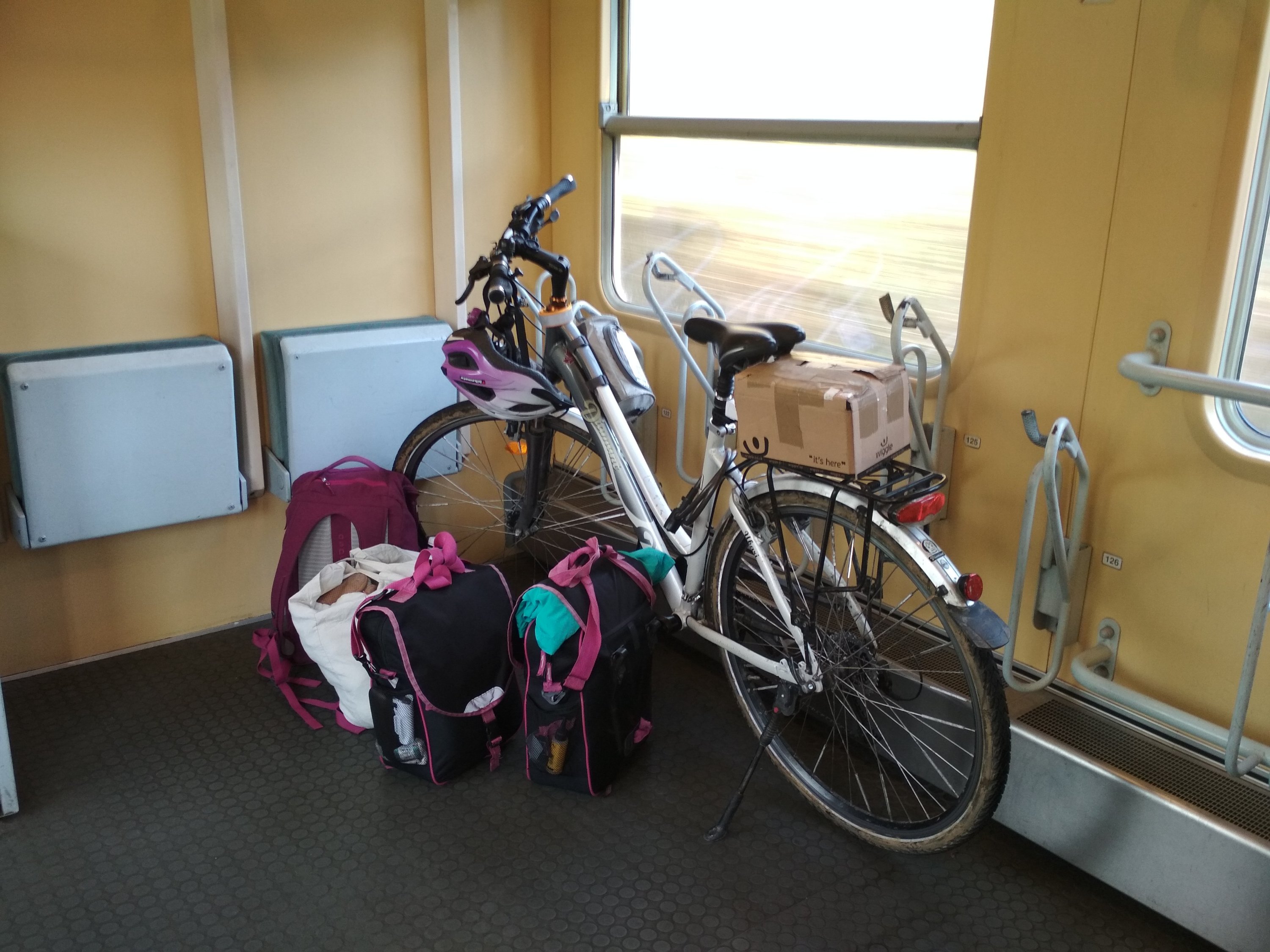 I have a seat, my bike and luggage was on the train and out of the way and there was enough space for multiple people with suitcases to get on at the same station and wait until they find a seat.

So far so good.

When the ticket lady checked my ticket a couple of hours into the journey she told me that I had to hang my bike on one of the allocated bike hooks. I told her it was less in the way as it was and she just repeated that I had to and added that there would be stress if I didn’t.

After a while she went away and I went back to what I was reading.

Cue the next ticket lady’s entrance.

Ticket lady 2: What did my colleague ask you to do?

TL2: She told you to hang your bike up on the hooks, didn’t she.

TL2: We will need the space if other people with bikes get on the train.

TL2: Hang your bike on the bike hooks, now.

Me: Whatever. *hangs bike on hook*

We now have the following situation: 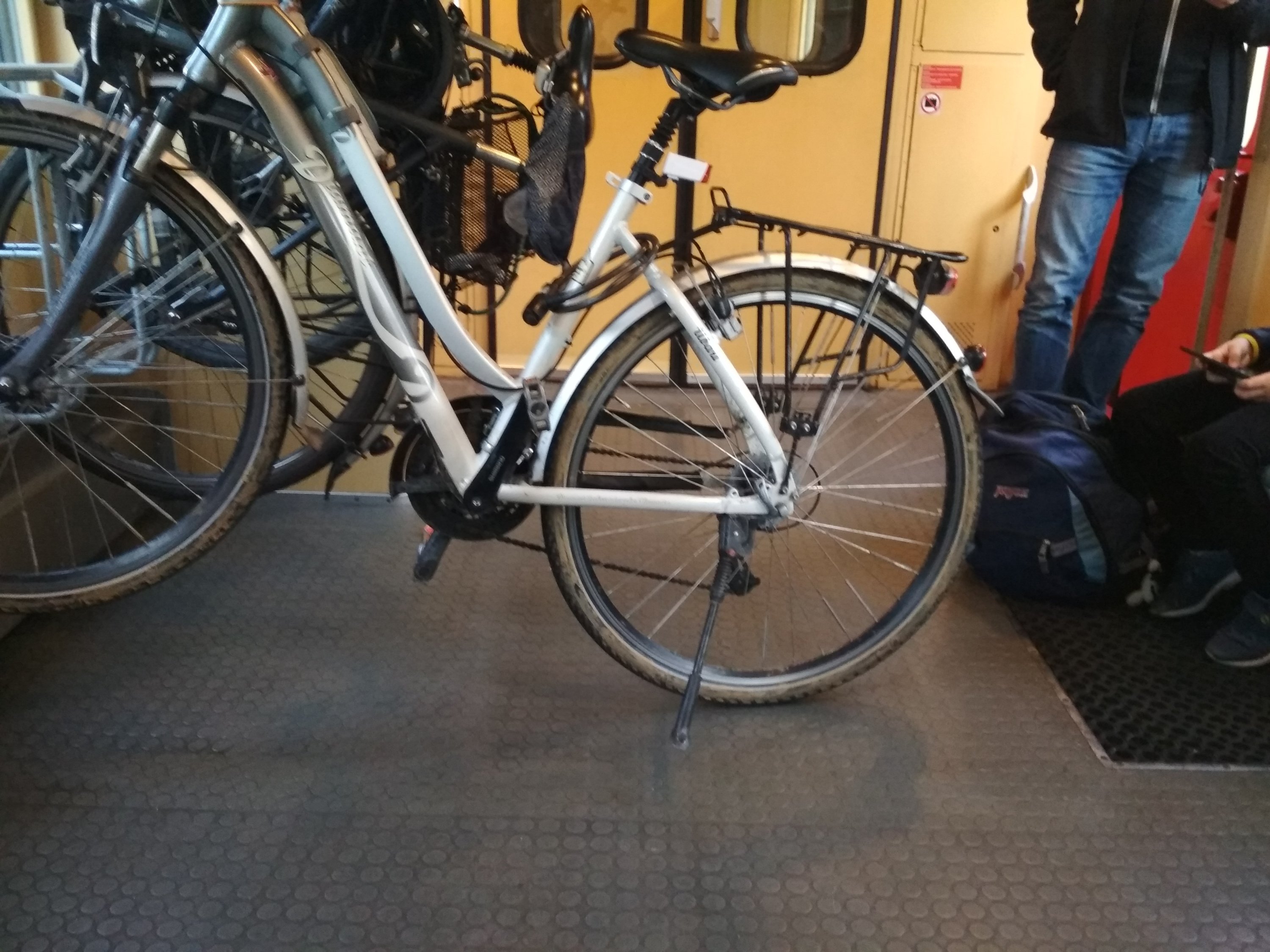 My bike is now on a hook. It is officially conforming to all the rules and regulations concerning bikes on trains.

The hooks are arranged in such a manner that you can fit the maximum number of bikes into the minimum amount of space with access to each of them separately. The theory is good, in practice it only works if there are no people in the area at the same time.

Unfortunately the train before this one was cancelled so there are a lot of extra people on board. It’s not bursting at the seams but there are a lot of people who haven’t found seats in the main passenger areas and are sitting in the bike section.

My bike is now perpendicular to the windows. It is about two thirds of the width of the carriage and there is a fold-down seat directly behind it. That leaves approximately 30cm between the back wheel and the-smallish-kid-on-the-fold-down-seat’s knees. Everyone who wants to walk along the train has to squeeze through the gap. After already squeezing past the smallish-kid’s family, and before squeezing between a foolishly placed dividing wall/electricity box and a lady with a large suitcase.

I feel sorry for everyone getting on or off the train with a suitcase or a buggy, and for the smallish kid who has to stand up to let them through, BUT, I take great pleasure in watching the (large :)) ticket lady squeeze past. If anyone complains I will refer them back to her too.

Just to clarify, I don’t think rules (and their enforcement) are automatically unnecessary, but I am 100% against enforcing rules purely for the sake of it, to the detriment of other good things like comfort.

Not that I am personally affected one way or the other. My seat is protected by the electrical box. At least until all the bike hooks are taken. I’d have to move then. It’s unlikely though – no new bikes have arrived in the compartment since I moved mine and I doubt any will. It’s November. The chances of five more bikes needing space on this train is remote.

* I’ve been back to my friend’s house and picked up all the things she brought back from England for me.

One Reply to “On rage against ridiculous rules”