There are some days when I go shopping on the way home from work and come back with a bag full of ingredients and a head full of ideas for dinner. Days when I look forward to peeling and chopping and frying and mixing.

A day where I get home, fall into a chair and only think about moving when I realise it’s dark and I’m hungry.

A day when washing up a saucepan* in order to heat up a tin of beans feels like too much work.

A day on which sitting at the table with a knife and fork trying to keep the beans from flying across the kitchen is a daunting prospect and wielding a cheese grater something unimaginably difficult.

I tear the toast into pieces, dropping them directly into the saucepan** with the beans, and crumble a piece of cheese on top with my hands. Then I stir it with a wooden spoon until everything is a big sticky lumpy orange mess. And then I go back to my chair and eat it. Out of the saucepan.

And then I call it a day and go to bed, leaving the unwashed saucepan on the counter in the kitchen..

* edit: one I didn’t wash up after using it last time..

** For anyone wondering, yes, I washed the saucepan first, before I started cooking. :p 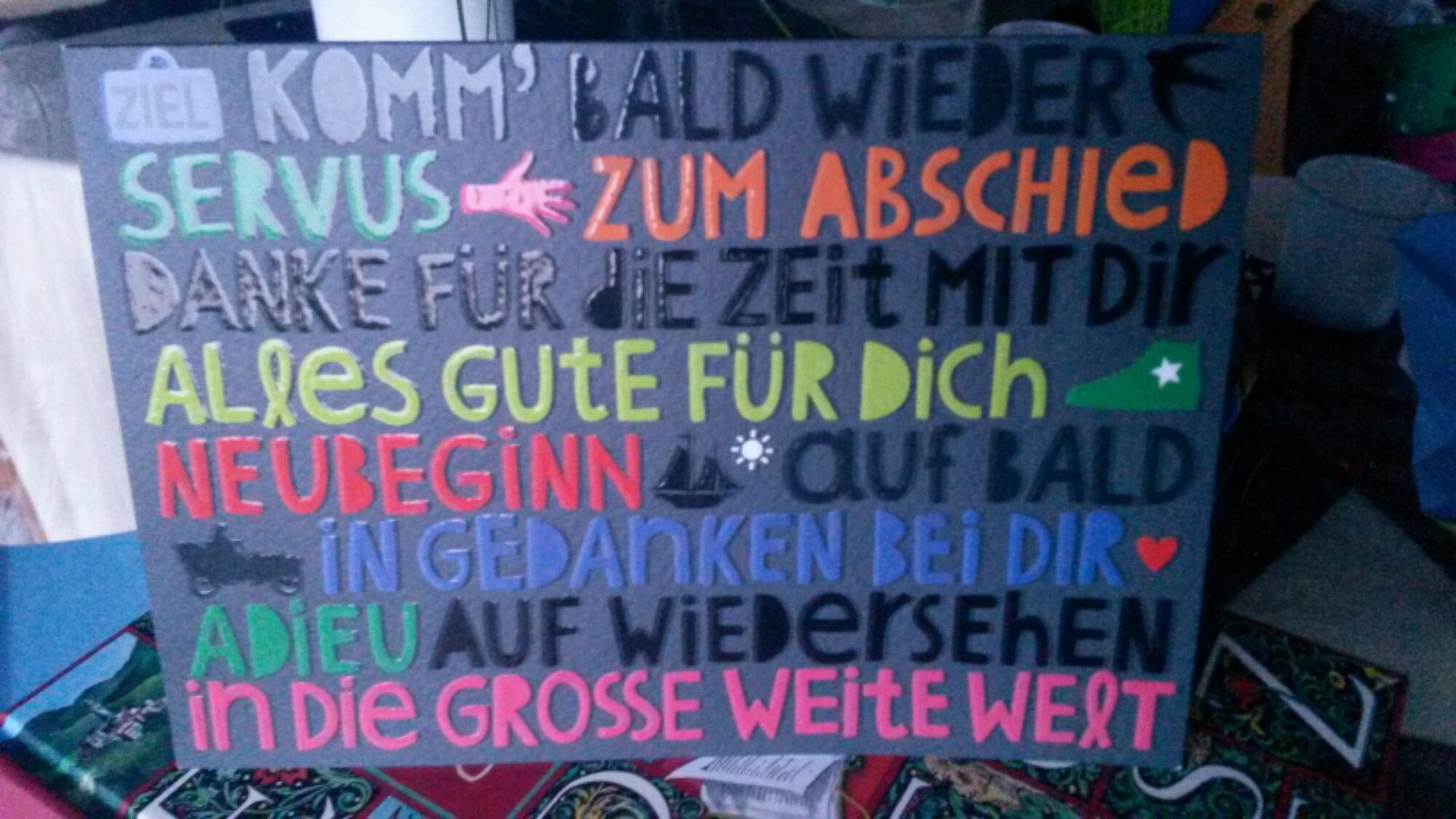 ..or a fire alarm, depending on personal preference.

I celebrated my leaving party on Monday.

I invited everyone who’s worked with me, and who I’ve worked for, since being here (4 and a bit years). I even invited my soon-to-be-ex colleague – it WAS kind of held in his honour after all – but he luckily didn’t come.

In the invitation I asked for volunteers to help me with preparations. There were so many helpers – not only beforehand, but also during and after the party itself – that it makes my head reel a bit just thinking about how lucky I am to know such amazing people. Some brought cake, biscuits or chocolates, one made a galoptious potfull of curry, some decorated the conference room, one helped me bake scones, some made sure the food was hot before carrying it in, others moved tables, collected dirty plates or washed up. There are probably a whole lot of people who did things I didn’t properly notice but who were busy in the background ensuring everything worked out.

My own part in the proceedings was largely unhelpful. I basically wrote a list of jobs I thought were necessary and left them to it while I busied myself with torturing pieces of cheese-and-pineapple with pointy sticks in the kitchen.

At exactly half past 4 they called me into the other room and sang “for she’s a jolly good fellow” (rather off-key and with a range of different lyrics, but who cares about tunes and words :))

The ‘party room’ looked fantastic, I’d brought fairy lights and candles and food and told my helpers to have fun playing. They’d mostly disregarded the ideas I’d had, but it was so much better their way 😉

I declared the buffet – if you can call a table of scones and cakes a buffet – opened and made a beeline for the tea.

I’d made several trays of food at the weekend, things like pasta bake that just needed warming up. I left everyone to their plates and went to put the trays of food in the oven – a posh job, where the oven racks/shelves are attached to the door and the whole thing opens like a drawer.

I was standing in the kitchen talking to the ‘curry-lady’ (who was cooking rice for me) when they called me into the other room (again). I left her to look after the oven as well as the rice and went back to the party.

One of my bosses gave a speech and presented me with a bunch of roses, Cornelia Funke’s Tintenherz trilogy and a hedgehog made of “waschknete” (plasticine you can use as soap) with rolled up money stuck in it as spines. Even those who couldn’t make it to the party had contributed and written in the card.

I was still admiring the roses when the rice lady came in to ask me to check if the food was done. Back I went to the kitchen. No rest for the celebrated, huh?

What started off as simply checking the state of the cheese, turned into something like the tablecloth trick only less elegant. The drawer was heavy and opened slowly and the pasta tray stayed put in the middle of the oven. I shut the door again in the hope it would be pushed back on to the rack and announced that it was falling off. Unfortunately no one understood what I meant. The helpful person next to me apparently thought I was too weak to open the oven and hurried to my rescue. He opened the oven door with full force and was privy to the best view of the tray emptying itself all over the bottom of the oven.

We scooped up as much as we could and I went back to the party, taking the curry with me.

Next thing we knew, was the fire alarm was blaring and a horde of fire engines was rushing to the scene…

Still, if you’re going to leave, you might as well make your mark first.

I really really hope nothing actually burned elsewhere while the firemen inspected the cheese-lined oven.

I can’t see how menu planning is supposed to work.

My problem is what happens when life strikes?

Like last Sunday when I just wasn’t hungry, or when things work out differently to the way I thought they would. What happens to the food planned for those days? Do you shift everything along a day (ie, Sunday’s dinner is then eaten on Monday)? But what if you have to make something easy on Monday so you can go out? Do you wait until Thursday when you have time? Leaving all the ingredients until then might mean they go mouldy in the meantime and you’re no better off than with no plan. Do you ignore Sunday altogether and carry on with Monday as per plan? Sunday’s food is then effectively scrapped before it’s had a chance to think about mould.. Do you incorperate the ingredients in the rest of the plan, thereby in effect replanning the week (making the first plan redundant)?

As I said, I haven’t figured it out yet. I try to buy things I can use in more than one meal and then use them up as and when, preferably before they run (or ooze) away of their own accord.

Whatever. I still had parsnips in my fridge from an idea I’d had a week ago. Parsnips are pretty rare over here and one of my favourite vegetables. Occasionally they’re to be found in fruit&veg shops, but they’re certainly not as widespread as in the UK. I found these in a supermarket which really surprised me. I would hate for them not to be eaten, but I somehow hadn’t got round to doing anything with them.

This evening was a stay-at-home kind of evening so I decided to grill them. It’s like roasting only quicker. And more exciting if you use baking paper. I am incredibly lazy as far as washing up goes.

However, I don’t think there’s a way around washing the tray when grillling. I set my oven on fire while putting the tray-with-paper-and-parsnips-on in it.

I decided washing the tray was marginally better than burning down the house (MY HOUSE!) and took what was left of the greaseproof paper off the tray. I added some peppers, cheese and ham, waited for just the right degree of burnt and settled down to a feast.